I was, once, a respiratory therapist, back in the days when I was searching for a way to support myself as an aspiring writer….  That sounds as if I’ve since become Minnesota’s Salinger or had possibly met Garrison Keillor.  I haven’t succeeded in either of those arenas although my brother did graduate from high school with Keillor and I played in the school orchestra with Keillor’s third wife’s sister but let me not put on airs which is different from being attached to a respirator.  None of this has anything to do with what I’m trying to convey here.

I was a respiratory therapist at a point in my life where from I was looking for a way to support my habit, i.e. hooked on eating something and sleeping somewhere.  Also, for my twenty-third birthday, the man I had married when I was seventeen changed the locks on our apartment without giving me a key.  Even back then, I could take a hint.  I was about to say, “I wasn’t stupid.”  But, Lordy, was I stupid!  None of this has anything to do with the issue I’m trying to address which is….  Well, I’ll get to that.

So, I was a respiratory therapist and feeling under-appreciated by not only my husband but by my supervisors at the hospital (who were both lower on the IQ scale than most iguanas and with far less imagination).  Fortuitously, one of my patients died.  I had nothing to do with his death.  In fact I had worked diligently to prolong his life but little can be done for a man with advanced emphysema, who stood at the side of his bed, bent at the waist, pressing his chest against his mattress, in order to support his one lung as he sucked smoke from a cigarette.  Upon this sad man’s death, I asked if I might attend his autopsy.  Why?  Who knows?
Minnesotans are known for their dawdling, drawn-out goodbyes. Perhaps I was looking to say farewell, bit by bit, in true Minnesota fashion.

Now I’ll get to what I meant to get to three paragraphs earlier which is the dumbing down of humankind.

What does respiratory therapy, autopsies, and long goodbyes have to do with worldwide stupidity? 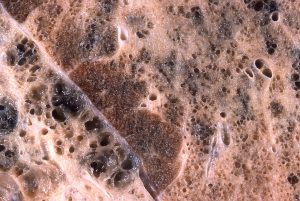 Have you ever seen a grossly emphysemic lung?  I have!  Instead of a sponge with many tiny holes, increasing the tissue area in order to absorb as much oxygen as possible, the sick lung is more like a civic center with space for all three rings of the Shrine Circus with some booths around the edge for poor and minimal food options.

Now picture an emphysemic brain.  Are you still with me or are you going to admit to having a short attention span?

A recent headline on The Guardian website reads: Twitter founder: Trump presidency is product of short attention spans.  Evan Williams, co-founder of Twitter and one who has already apologized for Twitter’s role in putting Trump in the White House, goes further to say that he believes our social media platforms are instrumental in shortening the human attention span.  “There is a media ecosystem that is supported and thrives on attention, period.  And that is what’s making us dumber and not smarter, and Donald Trump is a symptom of that.”  Williams goes on to say that “…quoting Trump’s tweets, or quoting the latest stupidest thing that any political candidate or anyone else says, is an effective way to exploit people’s basest instincts.  And that is dumbing the entire world down.”

This is a dangerous time to allow one’s brain to rot.  Each one of us needs our wits willing, ready, and able to make difficult decisions.  Jens Stoltenberg, secretary general of NATO, has said that with the threats posed by North Korea’s proliferation of nuclear weaponry and Russia’s aggressive positioning, we are living in “a more dangerous world” than we’ve encountered in over a generation, and perhaps, because of the complexity of the interplaying situations, our world may be more dangerous than ever before.  Stephen Hawking believes we are entering the most (emphasis on the most) dangerous time for this planet.  “We can’t go on ignoring inequality, because we have the means to destroy our world but not to escape it.”  He speaks of people in sub-Saharan Africa who have readier access to phones than they do to clean water.  Through their phones and social media, they are viscerally aware of what they do not have that other’s do and wondering how to get it.  But “access to information alone doesn’t make us smarter,” says Evan Williams.  “Is it actually… deepening our understanding of the world or is it just noise?”

Noise!  The  U.S. has a president with negligible intelligence and little experience in pretty much the whole lot, who shares his ill-conceived opinions expressed with a very, very small vocabulary – very small; very confusing; not good .  When advised to keep his mouth shut, he can’t.  When advised not to throw sand into the wind, he does.  When advised not to mumble the launch codes while standing too near the …  Damn!

Stoltenberg is concerned about the growing aggressiveness and complexity of this world’s international issues.  Hawking worries about the anger nurtured and evolving on a steady influx of information detailing horrifying human inequality.  Williams wonders how stupid we’re willing to become for the benefit of not thinking for ourselves and so not feeling responsible when Trump tweets the ultimate tweet.

Self-inflicted ignorance puts one in a significantly vulnerable position.  Like an empyhsemic bent over his bed, pressing his diaphragm into the mattress, desperately drawing smoke into one withered lung, a person will soon discover how dangerous it is to stand too long with all sides exposed the big boots of those selfish, stupid, and morally impoverished people we’ve allowed to lead.