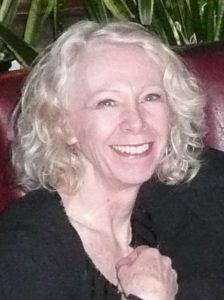 Karen’s theatrical experience began at the age of 15, when she played Kim MacAfee in a local production of Bye Bye, Birdie. Kim is 16 years old so Karen’s inauguration was precocious even though, at this point, she might be considered a late bloomer. She majored in theater at the University of Minnesota, where she studied under Doc Whiting, and, after graduation, continued acting in local Minneapolis theaters.

When she eventually began writing, Karen turned to fiction for children and young adults but never considered writing for the stage. Her first play, Slow Dance in Cut Time, was born in frustration with an unyielding novel that demanded she rewrite it in the form of a play. Since then, she has written six full-length plays and two ten-minute works.

Karen is a member of the Playwrights’ Center, headquartered in Minneapolis, Minnesota, where she lives. She is a past recipient of a Heekin Group Foundation Writing Fellowship and a winner of the of Time Out-London/Theatre 503 Urban Scrawl competition for the radio drama Arnos Grove.

Miriam has been actively involved in the non-profit and arts sector for 20 years. She was the founder of Fill The Cup, a fundraising program for arts, healthcare and community organizations. Miriam’s background consists of a broad range of experience in both the creative and management aspects of the creative and performing arts.
A student of piano performance and theatre design at Lawrence University, Miriam managed Theatre503/The Latchmere in London, England before completing her master’s degree in Management and Cultural Policy from Birkbeck College, University of London.

While in London, she worked as a theatre producer, director, production designer, and set designer. Miriam brings this array of experience to  DNT BLNK  in her role as studio director, and to Play Fair or Fair Play as literary manager.