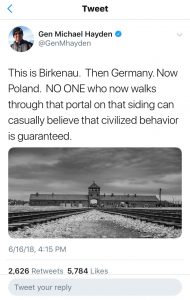 I just watched your interview with General Hayden.  As a determined and incisive journalist, you had an obligation to press the general for using, within his June 16th tweet, the photo of the train tracks leading to Birkenau.  As a Jew, you were true to your people and your history when you insisted that care be taken with comparisons made between one human tragedy and the Holocaust. As a child of survivors and a grandchild of victims, you were obviously motivated to respond emotionally to a possible casual use of Holocaust iconography.

However, I believe it’s time to stop holding the Holocaust sacrosanct.  It’s time to consent that the entire period of history, from the mid-1920s until well past the liberation of the camps, must be perceived and used as a lesson of the most profound importance to our entire world today.

The general has it right.  The tracks are being laid.  This Way for the Gas, Ladies and Gentlemen.

These are not my words.  As you probably know, this is the title of a book by Tadeusz Borowski, who survived the Holocaust, both Auschwitz and Dachau, only to die, to gas himself via kitchen stove, three days after the birth of his baby girl in 1951.  The scars you bear abraded your voice just last week.  So, here’s the calendar.  Point to the date on which the Holocaust came to an end.  Point to a date on which we will be able to talk about it without genuflecting.  Nazis will be marching in Washington, D.C. in August. Point to a date on which we can use the Holocaust as a warning and tell me it won’t be too late.

The general wrote, in his tweet, “Other governments have separated mothers and children.”  You, Mr. Blitzer, responded by indicating the difference between taking children to be housed somewhere and taking children to be murdered.  I am not denying that that is true.  But the Nazis tore children from the arms of their parents years before Birkenau, when they began uprooting Jews from their communities and outlying neighborhoods, collecting them within ghetto walls and then, again, when they began transporting the adults from the ghettos to work camps, leaving large numbers of children behind to fend alone.

With each step, Hitler was testing the world’s levels of tolerance and with each step, he discovered the vast arena in which he was free to destabilize, demoralize, and terrorize an entire race of people. Hitler was able to carry on, delving deeper and deeper into his fantasy of a Jew-free Germany, because no one objected.  Although these abhorrent actions were legal under Nazi law, they were inhumane, to say the least.  And still, no government or organization of any real strength objected.

We can no longer say, with any confidence, “It can’t happen here. “  The general has it right.  The tracks are being laid.  This Way for the Gas, Ladies and Gentlemen.